A soggy start at daybreak, paddling through mud and puddles in driving rain to feed the alpacas & reindeer at Great Ground Farm, made me think about warm hearty food and  sowed the seeds for working out what to cook for tonight’s dinner. Thinking about dinner before I’d even had breakfast was perhaps not such a good idea as it made my working day even more arduous than usual. It’s not that I’m not dedicated to my craft (final edit of THE SKIPPERESS’S TALE is in full swing), but somehow my mind kept wandering from the subject matter back to food. Eventually (daily word count quota at the coal face of creativity reached) I relented and trotted eagerly to the kitchen to see what I could throw together. A problem then arose as I hadn’t had time to go food shopping for a week or two, so would have to work with what was around. I’m also still working with half a kitchen, no hob and an electric oven that’s on its last legs, but compared with the lack of roof and last week’s chimney fire it’s not really a problem at all. So, what ingredients were available? A tin of baked beans, a butternut squash and two bananas didn’t fill me with inspiration (& the bananas were for the parrot’s & macaws’ breakfast tomorrow). The last of the potatoes from the garden, a few green beans and some cavolo nero (black kale). Hmmm. I’d kind of built up my expectations for something a bit more inspiring.

Shitake mushrooms suddenly sprang to mind (or at least had sprung up overnight in a corner of the workshop thanks to a gift from my good friend and benefactor Lady Marrow of Barnsley) along with some pheasant breasts I’d already extricated from a brace of the lifeless feathered creatures that had appeared hanging on the wing mirror of my Land Rover (my aversion to organised game shooting still stands, but I couldn’t bear to waste them).  I haven’t included photos of the breast removal process as it’s a bit gory and reminiscent of Laurie Graham’s brilliant Jack the Ripper novel THE NIGHT IN QUESTION I’m currently reading. If anyone wants tips on how to do it, though, I’m more than happy to advise. Although I wouldn’t advise answering the door to the post lady half way through as the sight of me in a bloodstained apron brandishing a giblet-laden filleting knife gave her a bit of a fright and added another dimension to the complaint I’d made the week before that she’d ‘disturbed me in the middle of a murder’. Now, it seems, the gossip in the village is that the ‘odd man with the llamas’ might be a homicidal maniac. I’m quite upset because they’re not llamas, they’re alpacas…

Anyway, back to the pheasant breasts and shitake mushrooms. Having never combined the two ingredients, it occurred to me that the gamey/earthy flavours might work well together. Fortunately my hunch was correct and the result absolutely delicious… 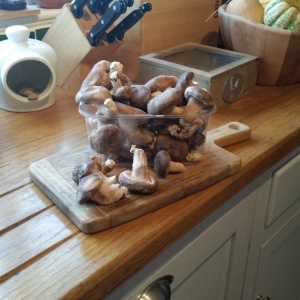 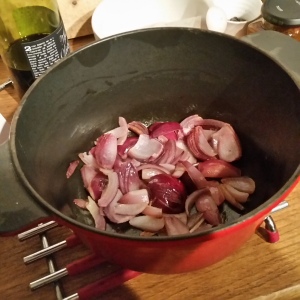 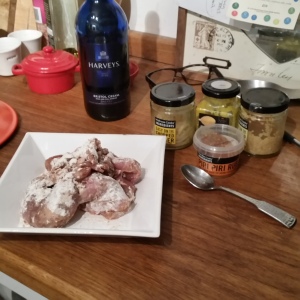 Heat the oven to 200 degrees Celsius.

Clean & slice the mushrooms (there’s no need to removed the stalks if they aren’t tough) and put on a baking tray in the top of the oven with a little of the oil for about 20 mins.

Meanwhile put the onions in an oven proof casserole dish with a little oil and put in the middle of the oven (without the lid).

Mix the piri piri spice with the plain flour (reserving about two teaspoonfuls) and toss the pheasant breasts in it.

Take the mushrooms out of the oven, dust with the reserved flour and replace in the oven for another 10 mins.

By now, the onions should have begun to caramelise. Throw the pheasant breast in with them, drizzle with the rest of the oil, and cook until the breast have browned. Tossing them half way through will make them cook more evenly.

In the meantime the mushrooms need to be doused in the sherry (sake would work equally as well, but I couldn’t find any) and cooked for about 10 more mins.

Finally, put the mushrooms, chopped celery, garlic, mustard, chutney, soy sauce and chicken stock in with the breasts, put on the lid and cook for about 30-45 minutes.

Grill the streaky bacon to serve on top (or it could be chopped, fried & combined with the casserole). 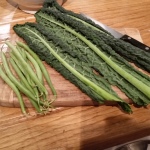 Please excuse the large serving in the photo – I was extremely hungry!

And, for those of you who have requested recipes using either alpaca or reindeer meat, the answer is firmly in the negative. I’m not sure I’d enjoy cooking with, let alone eating, anything that had a personality and a name…

A British writer - author of WEIRD SEX, WHAT A PERFORMANCE, BEAST WAGON & CURTAINS - I have had previous incarnations as a circus ringmaster, magazine editor, voice-over artist & yacht skipper. I am currently in the process of moving back to rural England from Malta. END_OF_DOCUMENT_TOKEN_TO_BE_REPLACED
This entry was posted on Tuesday, January 17th, 2017 at 13:50 and tagged with pheasant, shitake mushrooms and posted in Recipes, The Farm. You can follow any responses to this entry through the RSS 2.0 feed.
« Writing is a dirty business…
Back from the trenches… »

2 responses to “Casserole of pheasant breasts with shitake mushrooms”