CURTAINS paperback is available for pre-order – May 1st 2012

CURTAINS (paperback) is available for pre-order from Amazon 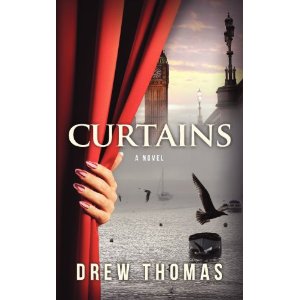 All author royalties earned from the sale of this novel will be donated to VISION AID OVERSEAS – a charity working to transform eye care services for people in developing countries.

CURTAINS will be published at last!

The big news is that CURTAINS will be published this year, both as a kindle edition & as a paperback original (Cherwell imprint). I’m in mid-edit at the moment and could be on to galley proofs next week (provided I don’t get too diverted by the fact that the pool hasn’t been tiled because it keeps raining and the house is far from ready for the first guests at the end of the month. Focus, Drew, focus!!!)

“I feel the need, for the sake of my sanity, to begin this very personal memoir immediately – before the future becomes the present and the present becomes the past. Even the recent past is a fragile entity, more than a little at the mercy of memory.”

Danny Devereux is a shy and introverted cabaret performer with an astounding talent for mimicry, a raucous and controlling alter-ego named Stella and a preoccupation with curtains. He has been working the London circuit for years when he unwittingly acquires the ultra-ambitious Veronica ‘Roni’ Bedford as his manager then wife. Her relentless drive propels him to stellar heights of television success.

One television series leads to another, but all is not harmonious in the celebrity household, even before a major scandal hits the headlines.

In self-induced exile in a luxurious Thames-side apartment, Danny looks back on the power games involved in his reluctant but meteoric rise to fame and spectacular fall from grace as he engineers a plan to vindicate himself. Will he succeed in his attempt to make appearance triumph over reality?

A living van is conceived & born…

Rather more easy and straightforward than continuing with ‘The Grass is Always Greener’ series was the 9 days last month spent assisting Dad with the recreation of a living van he is building on a chassis acquired some time ago. Planing the timber and cutting mortise and tenon joints was very good practice for when I (eventually) build a timber-framed house…

I’ll be back again in April to assist (more diversion from the written word), so we’ll hopefully get closer to the finished article, which will look something like this:

Enjoyed a lively weekend in London for Neil Hodgson’s 40th celebration – a surprisingly singular festivity considering he had three leaving dos when he left London for Malta (and then came back anyway!)