‘What a Performance’ available on Kindle 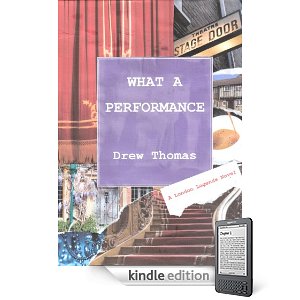 Olivia Greenstreet – former star of stage and screen – celebrates her sixtieth birthday by upholding her decision of twenty years to stay out of the limelight and live peacefully, if slightly precariously, in her crumbling country mansion with an array of companions whom she has helped to opt out of the rat race.

Justin Featherstonehaugh (‘it’s pronounced Fanshaw, actually’)  – writer, producer and theatre entrepreneur – is risking millions in a West End musical production based on the film ‘The Ball’ in which Olivia – who also happens to be Justin’s ex-wife – starred twenty years earlier.

Susie Venables – Justin’s vitriolic, pushy and opportunistic current wife – is playing the lead in ‘The Ball’, but her lack of acting talent is causing mayhem and concern at rehearsals.

When Susie is found hanging from a chandelier in a macabre re-enactment of a scene from the film just before opening night, the hunt for her killer and the quest for a new leading lady turn chaos to pandemonium in the back-stabbing world of West End Theatre where secrets, lies, long-term deception and career-changing sex scandals seem to be the order of the day. A sexually frustrated vicar’s wife, a busty Jewish impressionist and an unfortunate case of mistaken identity lead to more confusion as suspects and motives multiply. The pace quickens, culminating in an unexpected but satisfying conclusion to the convoluted plot of this heart-warming tale of the importance and realisation of dreams.

A British writer - author of WEIRD SEX, WHAT A PERFORMANCE, BEAST WAGON & CURTAINS - I have had previous incarnations as a circus ringmaster, magazine editor, voice-over artist & yacht skipper. I am currently in the process of moving back to rural England from Malta. END_OF_DOCUMENT_TOKEN_TO_BE_REPLACED
This entry was posted on Wednesday, June 8th, 2011 at 14:08 and posted in Good Days. You can follow any responses to this entry through the RSS 2.0 feed.
« ‘Weird Sex’ is available on Kindle…
Heat, dust & some unpleasant surprises in the wastepaper bins… »